Diesel generator (DG) sets are used by a wide variety of businesses most of the times to provide a backup power source. It comes in varying capacities for various businesses that they serve in such as,  manufacturing, mining, off-shore platforms, offices, and universities.  Usually, a 30 kVA single phase DG set is preferred for a small shop while a 2500 kVA DG set is used for a large factory.

The issue here is that unless the DG set is operated at its optimal load (usually 80% of maximum load) the amount of diesel consumed as opposed to energy produced becomes skewed. A sub-optimal load can cause losses up to 75% of revenue. Also, DG sets start performing sub-optimally when regular maintenance is not done. The only way this can be ascertained by the amount of energy being produced, against the diesel consumed.

In order to successfully optimize DG set performance, one must monitor a wide variety of parameters. Each of these parameters has its own significance in the optimization of the DG set. Some of the parameters to be monitored are:

The load on a DG defines the amount of energy that a DG has to supply. Running a DG on less than optimal load causes carbon buildup on inside the engine. This results in a reduction of power producing the capacity of the DG. Overloading a DG also reduces its efficiency by increasing the wear and tear of the engine and ultimately, reducing the engine’s life.

The amount of time for which the DG set has been working is one of the most important parameters to monitor accurately. As DG sets are used for a wide variety of purposes, operational hours help in understanding the usage patterns of the DG.

Fuel has to be closely monitored in order to understand about the overall efficiency of the DG; how the quality of the fuel affects the performance and whether there’s any fuel theft happening. Fuel is directly related to the cost of operating the DG set.

Coolants are used for keeping the engine temperature in check, in order to prevent rusting of the engine. The dip in coolant levels, if not corrected in time, causes the DG to overheat, and may cause irreparable damage to the DG set.

Batteries in DG sets are used in order to provide starting voltage. The batteries deteriorate over a period of time and lead to problems in starting the DG set.

How analytics figures in

Analytics in DG set monitoring helps to reduce incidents of misuse and misapplication. It helps to prevent fuel thefts while allowing maximum uptime. A wide variety of patterns that can be found by using a good monitoring system include:

Keeping a track of fuel consumed by the DG set, especially when compared with the energy produced and operational hours, gives a perfect idea of its overall efficiency. Obviously, a DG consuming more fuel, and producing less energy, is in need of maintenance.

A comparison of fuel consumed with the energy consumption gives an idea of how the health of DG is over a particular time period. Over the period of time, a pattern of increasing fuel consumption for lesser energy production will be observed. When such a pattern comes up, the DG can be sent for preemptive maintenance, instead of waiting for a breakdown. This helps in increasing the uptime and the overall life of the DG. 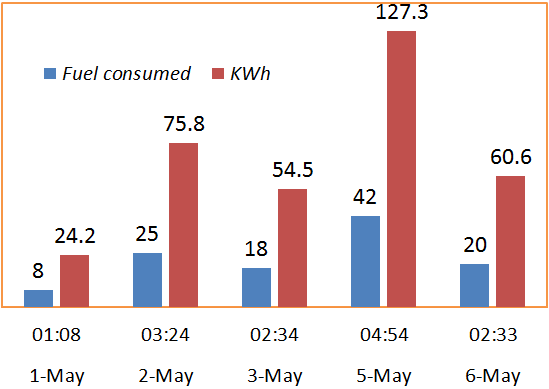 The load patterns of a DG set help in understanding the usage patterns. A DG that is mostly under-loaded should be replaced with a DG of smaller rating. Conversely, a DG that is overloaded most of the times, should either be replaced by a single higher capacity DG or multiple lower capacity DGs. 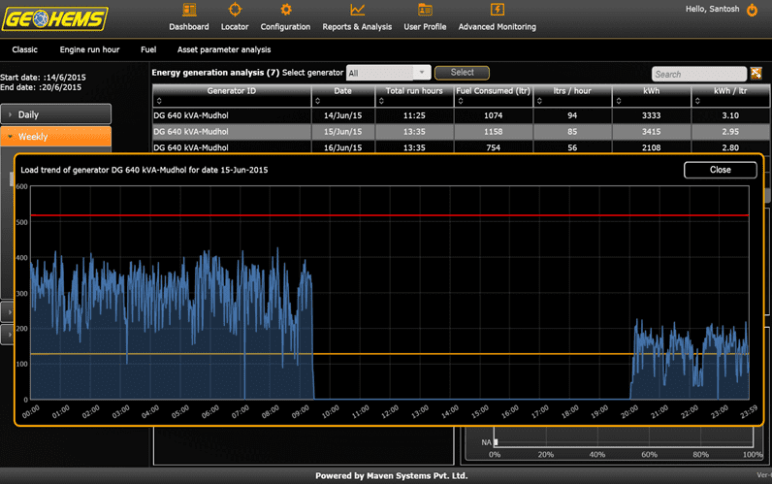 Load analysis also helps in case multiple DGs are being operated. For example, in case of load is increasing or decreasing at regular intervals in a day, the operator can choose when to engage a single DG, and when to engage the other DGs.

The smart city initiative being launched in 100 cities in India, promises to bring a wealth of data for purposes of analysis and trend finding. DG set monitoring system, will play a big part in understanding the load patterns of industries, oil rigs, townships and gated communities. The system will benefit DG set manufacturers, providers, and users by fetching accurate data of the performance of their DG sets. Analysis of this data will help in making informed business decisions that will enable consumers to cut operational costs, and increase efficiency.

The Big Data of Wearables

The internet of things: a second digital revolution

Zeen is a next generation WordPress theme. It’s powerful, beautifully designed and comes with everything you need to engage your visitors and increase conversions.